Dr Bertrand Piccard and André Borschberg, members of the Antoine de Saint-Exupéry Youth Foundation (F-ASEJ),are the co-founders and pilots of this unique solar plane. For the 70th anniversary of the Little Prince, they organize an exceptional event. July 11th, at 9 A.M., a breakfast under the wings of the Solar Impulse will gather civilian and military personalities, including the General Consul of France in NewYork.

This event is the last of an incredible trip. The solar plane crossed the United States, departing from San Francisco on May the 3rd, then reaching Phoenix, Dallas, St. Louis, Cincinnati, Washington, to finally arrive to New York on July 7. The two pilots, Bertrand Piccard and André Borschberg alternately took place in the cockpit. 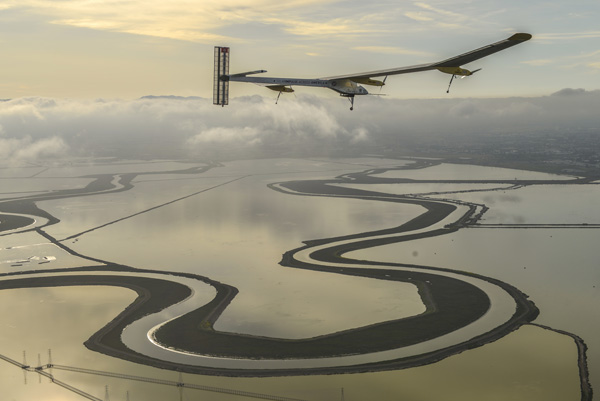 The “Across America” mission at a glance:

During its stay in New York, Solar Impulse  had a dense program of events including a news conference on Monday, July 8 at noon at JFK, participation in the NASDAQ Opening Bell Ceremony and a meeting at the UN with UN Secretary General Ban Ki-Moon on Tuesday, July 9.
Among these events, the Antoine de Saint-Exupéry Youth Foundation (F-ASEJ) is commemorating the 70th anniversary of the publication of the Little Prince in New York back in 1943. To homage this story intimately linked to the history of aviation, Solar Impulse pilots will wear a commemorative badge on their flying suits and the Little Prince’s yellow scarf, while carrying a special edition of the book in the cockpit.

For more info about the Solar Impulse : the official website