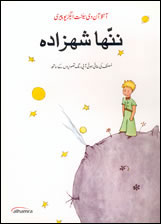 The Little Prince in Urdu, translated by Shafiq Naz and Bilqis Naz.
Urdu is nowadays the national and official language of Pakistan (population approximately 125 million). Urdu has long been a lingua franca in the region, and is spoken in all the towns and cities. The ethnic language of Muslim refugees from Northern India after Partition in 1947, over the last 150 years Urdu has acquired the status of language of culture in the Pakistani Punjab. Urdu is an Indo-Aryan language of Northern India which shares much of its syntax and morphology with Hindi, apart from certain Persian elements. The basic Urdu vocabulary is also shared with modern Hindi.

Numerous borrowings from the Arabic and Persian, however, have given the phonological system of Urdu a number of extra phonemes, and the Persian influence means that it excludes certain phonemes introduced by the Sanskritisation of modern Hindi.  Urdu derives all its learned, literary, political and religious vocabulary from Arabic and Persian. The same applies to scientific vocabulary, although English neologisms are common.