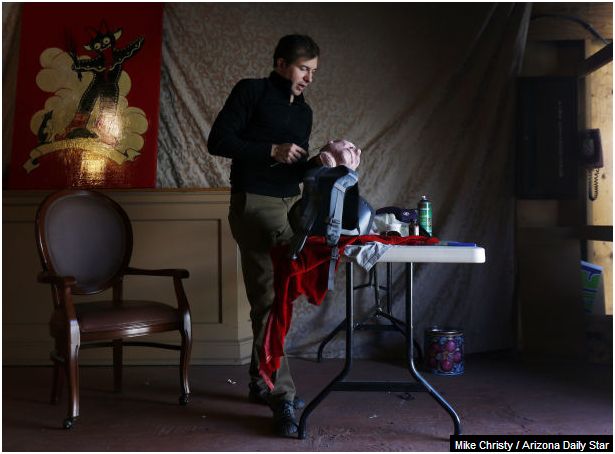 Tucson’s puppet show theater — Puppets Amongus — is about to take a bite of the Big Apple, with its first-ever off-Broadway production.

Matt Cotten, who runs Puppets Amongus, and his sister,Kim Martin-Cotten — an actor, director and producer for New York’s Hang a Tale theatre company — have developed “The Little Prince” into a puppets and people production that will run Feb. 23 through March 22 at The Pearl Theater.

Getting to New York is a big accomplishment for anybody, but, especially for a small puppetry theater. Generally, theater involving puppetry is still pretty rare on Broadway and off-Broadway, Cotten said. There are exceptions, such as “The Woodsman,” which is currently playing off-Broadway, “The Oldest Boy,” which is playing at the Lincoln Center, and larger productions, such as “The Lion King.”

“We have talked forever about combining my puppetry with live acting,” Cotten said in an email interview. “The idea was proposed to The Pearl Theater, on 42nd Street (in New York), and their response was very positive.”

Cotten has often made puppets for The Rogue Theatre in Tucson and, occasionally, for Arizona Theatre Company, but performing at The Pearl is an opportunity for much greater exposure, he said.

“Also, the cast that Kim has assembled brings a ton of experience and expertise to the endeavor,” Cotten said. “It’s very exciting for me to work with such amazing artists.”

After reading a copy of “The Little Prince” for the first time in 30 years, Cotten was struck by the story’s deeper meaning.

“I was impressed by the layers and meaning, some of which can only be recognized by an adult reader,” Cotten said.

All of the characters for “The Little Prince,” except for the Prince and the Aviator, are puppets and masks, and most puppets are animated by two or more performers, Cotten said.

“The puppetry lends an air of fantasy, or an exploration of the subconscious,” Cotten said. “Or the genius of a child’s imagination.”

Cotten has been working around the clock — from design to fabrication — since late spring, to create all 20 puppets involved in the production. And, it’s been done on a “shoestring budget” of less than $2,000.

But he says Puppets Amongus and Hang a Tale are planting a seed with the project that will potentially lead to bigger projects with bigger budgets.

“It’s a lot of work, but it has been thrilling,” Cotten said.

For the next phase of the project, Cotten and his sister intend to put on “The Little Prince” in Tucson, San Diego and Kansas City.

“We will see how it goes in New York,” Cotten said. “Personally, I think that it’s just the beginning.”