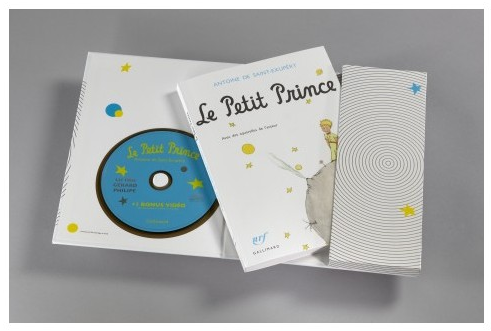 – The book, as published by the NRF in 1943 with original watercolors by Antoine de Saint- Exupéry

– The story read by Gérard Philipe: in 1954, for the tenth anniversary of the death of Saint- Exupéry, Gérard Philipe releases its famous adaption of the book. Published by the Festival label , this disc actually offers a selection of thirty- four minutes, about a third of the story . It also stars the voice of George Poujouly , 14 years old at that time, who plays  » The Little Prince  » and who became famous for his role in  » Jeux interdits  »   , those of Michel Roux ( the serpent) and Pierre Larquey ( the lamplighter ) . But it is obviously Gérard Philipe voice who marked generations of listeners. Audio CD 40 minutes .