Great news for the friends of The Little Prince from the land of the rising sun: one of the original illustrations for the world-famous book has come to light!
In 1994, Minoru Shibuya, a museum curator from Japan, purchased a signed drawing at a book fair; the drawing showed the Businessman\’s planet visited by The Little Prince on his travels. Although he believed that the drawing was indeed by the hand of Antoine de Saint-Exupéry, Mr. Shibuya also thought it was nothing more than a draft. Antoine de Saint-Exupéry was known for drawing whenever and wherever he could, even on restaurant table-cloths. Indeed, that is precisely why there are so many sketches all over the world, points out François d’Agay, the writer\’s nephew. « Seeing it gives me a great deal of pleasure. I am much moved to see a drawing by Saint-Exupéry, » he said. The mystery as to how the drawing came to be in Japan remained unsolved, however.
The drawing was recently examined by experts and identified as very probably being one of the drawings used by the US publisher Reynal & Hitchcock for the very first edition of The Little Prince in 1943. If this is really the case, it represents an incredible find, since the original drawings for The Little Prince were believed lost after the death of the author and aviator. It would be only the fourth drawing discovered to date! The news was released in Tokyo, at a press conference attended by François d’Agay.

On 27 March at the 27 Paris Book Fair, the L’Express-Lire group officially presented a cheque for 28,000 euros to the voluntary group Dessine-moi un Mouton which works with families affected by AIDS. The cheque represents the proceeds of sales of a special issue of Lire magazine, devoted entirely to The Little Prince, to mark the 60th anniversary of its publication in France. For every copy sold, 50 centimes was donated to the association.
For the past 17 years, Dessine-moi un Mouton has been offering social and psychological support to families affected by AIDS. A team of experts helps families try and keep life on an even keel for children and parents alike, to re-establish family ties, to be part of mainstream society despite the disease, as well as helping keep track of their medical follow-up. Since 1990, the group has reached out and provided support to over 1,000 families. 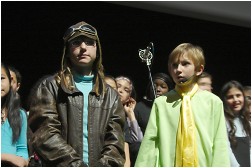 On 18 December, the people of Toulouse paid tribute to Saint-Exupéry at the Cité de l’Espace (Space City). A moment of commemoration that united the entire aerospace family based in Toulouse for a magnificent evening, orchestrated by Martine Saint-Martin, Midi-Pyrénées representative of the Espace Saint-Exupéry: « We wanted to pay special tribute on the occasion of the 60th anniversary of the publication of Le Petit Princei n France, but even more especially on the 80th anniversary of the author’s first visit to Toulouse-Montaudran where he began his career with Latécoère, on 14 October 1926. »
The evening got under way in the Imax theatre Astralia attraction in Space City, with a moving introduction from Mr. François d’Agay, nephew of Antoine de Saint-Exupéry.
This was followed by a splendid concert, Clair de Terre (Earthlight), created by Jean-Noël Sarrail, which visits the main themes of The Little Prince, and which was beautifully interpreted by the pupils of the Lavaur, Gratentour, Reynerie and Graulhet middle schools.
The evening also saw the official opening of a very special exhibition on Saint-Exupéry and The Little Prince entitled A Prince among the Stars, in the presence of François and Olivier d’Agay, the nephew and great-nephew of Antoine de Saint-Exupéry. The exhibition includes original drawings by Saint-Exupéry, but also a collection of books, flight instrument and, most impressively, some very fine sculptures of the writer-pilot and The Little Prince, the work of P. Jouffroy and Madeleine Tezenas du Montcel, official Air & Space painter.

A lecture on the subject of Antoine de Saint-Exupéry and The Little Prince will be held on Wednesday 15 November at the Espace Bernanos, Paris 9e.
The lecture will be given by Mr. Howard Scherry, a leading specialist on Saint-Exupéry\’s life in the USA, who has flown over from New York for the occasion. He is also the President and Founder of Remembering Saint-Exupéry, an organisation which exists to promote the memory and the works of the writer and aviator in the United States.

The celebrations began on 13 January 2006 at the Théâtre Michel (Paris). Friends of The Little Prince celebrated his birthday in fitting style. Nikolaus Schapfl\’s opera was performed in its full-stage version before an audience of 2,500 spectators.

Lire magazine published a special issue devoted to The Little Prince, an exhaustive document on the tale and its author. L’Express also ran a full-length feature on The Little Prince which included a free copy of the reading recorded by Gérard Philipe (1954).

Gallimard, the book\’s French publisher, offered its readers a collection of the author\’s drawings: Antoine de Saint-Exupéry – Aquarelles, pastels, plumes, crayons. Also as part of the 60th anniversary celebrations, the book Il était une fois… Le Petit Prince (Once Upon a Time there was… The Little Prince) is an anthology compiled by Alban Cerisier including an analysis of the work and previously unpublished accounts and critical reviews. A limited edition and a CD read by Bernard Giraudeau were produced for the occasion.

To immortalise the 60th anniversary, a statue of The Little Prince was unveiled at his birthplace in Northport (Long Island, USA) on 16 September 2006.

In the summer of 1942, Antoine de Saint-Exupéry moved to Northport, a little village on Long Island not far from New York, to a mansion by the name of the Bevin House, and it was here that he wrote The Little Prince. A sculpture of the Little Prince is to be unveiled here shortly. Saint-Exupéry was looking for a quiet place in the country where he could work in peace, but close enough to New York for him to stay in touch with his business affairs. He had been living in the USA for over 18 months, having moved here after demobilisation, in common with many French intellectuals. He was already highly popular and had enjoyed some success, particularly with the publication of Flight to Arras (Pilote de Guerre). One day, his US publisher saw him sketching an unusual little character. He managed to convince Saint-Exupéry to write a children\’s story to be published in time for Christmas 1942. And it was in Northport that Saint-Exupéry found the time to write his tale and draw the illustrations, although The Little Prince was not actually published until April 1943.

In 2004, the Northport-East Northport Public Library celebrated its 90th anniversary. To mark the occasion, the library was extended and a garden laid out for readers\’ enjoyment. Next September, a bronze statue of The Little Prince is to be unveiled on the terrace, a tribute from the community of Northport to the character of universal appeal who was born here. The project was the idea of Yvette O’Brien, a French teacher who has lived in Northport for 35 years. Mrs. O\’Brien thought the Northport library garden would be the ideal setting for the sculpture, which will commemorate for all time the historic moment of The Little Prince\’s creation.

The highly dedicated B612 Foundation, named after the famous asteroid, has taken upon itself the mission of saving the Earth from collision with an asteroid.  Although the Little Prince\’s planet is not going to crash into the Earth, there is another asteroid, discovered in 2004, that is scheduled to cross our path in 2029. Its name? Apophis, the Egyptian god of destruction, or 2004 NM4 to those in the know. A giant, 320 metres in diameter, which on 13 April 2029 will pass just 30,000 km from the Earth. On the scale of the solar system, that represents about the thickness of a sheet of paper. A bright star will be seen crossing the sky over Europe and North Africa. That is when we will probably find out whether Apophis is likely to collide with the Earth on its next passage in 2036, also on 13 April. The consequences would be unthinkable. If the asteroid were to plunge into the sea, it would create a catastrophic tidal wave; were it to hit land, so much dust would be thrown up into the atmosphere that it would trigger a climate cataclysm to match whatever caused the disappearance of the dinosaurs.

Under its President Russell Schweickart, a former Apollo programme astronaut, the B612 Foundation and its team of scientists, astronomers and astronauts are studying the risks posed by a collision between the Earth and an asteroid in the hope of preventing such a disaster.  Since it was founded in 2002, the Foundation has come up with several action plans. The option finally chosen: to make use of gravity. This would be the simplest solution to put into practice, the least expensive and the least dangerous. The principle is simple: a massive and enormously heavy object must be placed in a close orbit around the asteroid. If this were done well enough in advance, the extra hundreds of kilometres of distance gained would be enough to put the Earth out of all harm\’s way.  Ever since 1998, a Nasa programme has been identifying and tracking all objects in space over 1 km in diameter. There are over a thousand of them scattered along Earth\’s path, not to mention the smallest asteroids, which are numbered in the hundreds of thousands.  A monitoring and early warning programme is being set up. Here is an original project that the foundation hopes to be able to develop in conjunction with Nasa, to be operational by 2015.

On 11 March, a stage adaptation of The Little Prince, O Pequeno Príncipe, was performed for the first time in São Paulo, Brazil. The highly original adaptation, which relies on extensive technical resources, was directed by João Falcão. The part of The Little Prince was played by Luana Piovani, who had already scored a big success in 2003 for her part in the adaptation of another well-known children\’s tale. The performances also have a charitable role to play by collecting food in exchange for theatre seats. The food collected is then distributed to children\’s charities, hospitals and kindergartens.

Welcome to the world of Antoine de Saint-Exupéry! Gregor Seyffert invites us on a journey into the infinite realms of the imagination.
Disappointed by love, The Little Prince leaves his planet and travels the universe in search of friendship, humanity and affection. In the course of his journey, he meets a series of mysterious people and animals. Through the questions he asks of the world and his experiences in it, at the end it becomes clear: it is only with one\’s heart that one can see clearly.  At the end of his journey through the world of grown-ups, The Little Prince finds the strength to return to his planet and his love.

Producer and choreographer Gregor Seyffert understands Saint-Exupéry\’s message in The Little Prince. As is often the case with tales, he says, it is a book for children and adults alike, full of delight. Above all, for him, it is the most touching existentialist work of the 20th century. He remembers rationing himself, when reading it, to just a few pages at a time, so as to postpone the moment of reaching the end. « The words, phrases and images were just too precious ». Through this ballet, Gregor Seyffert invites us to rediscover the eternal child that dwells in us all. In his notebook he writes : « Far too soon, at an age when we are still in need of a refuge, we have been deprived of (weaned away from) God, and so now we must fight our way through life, lonely little boys and girls ».